NUMBERS TELL THE STORY OF A GREAT FIRST SEASON 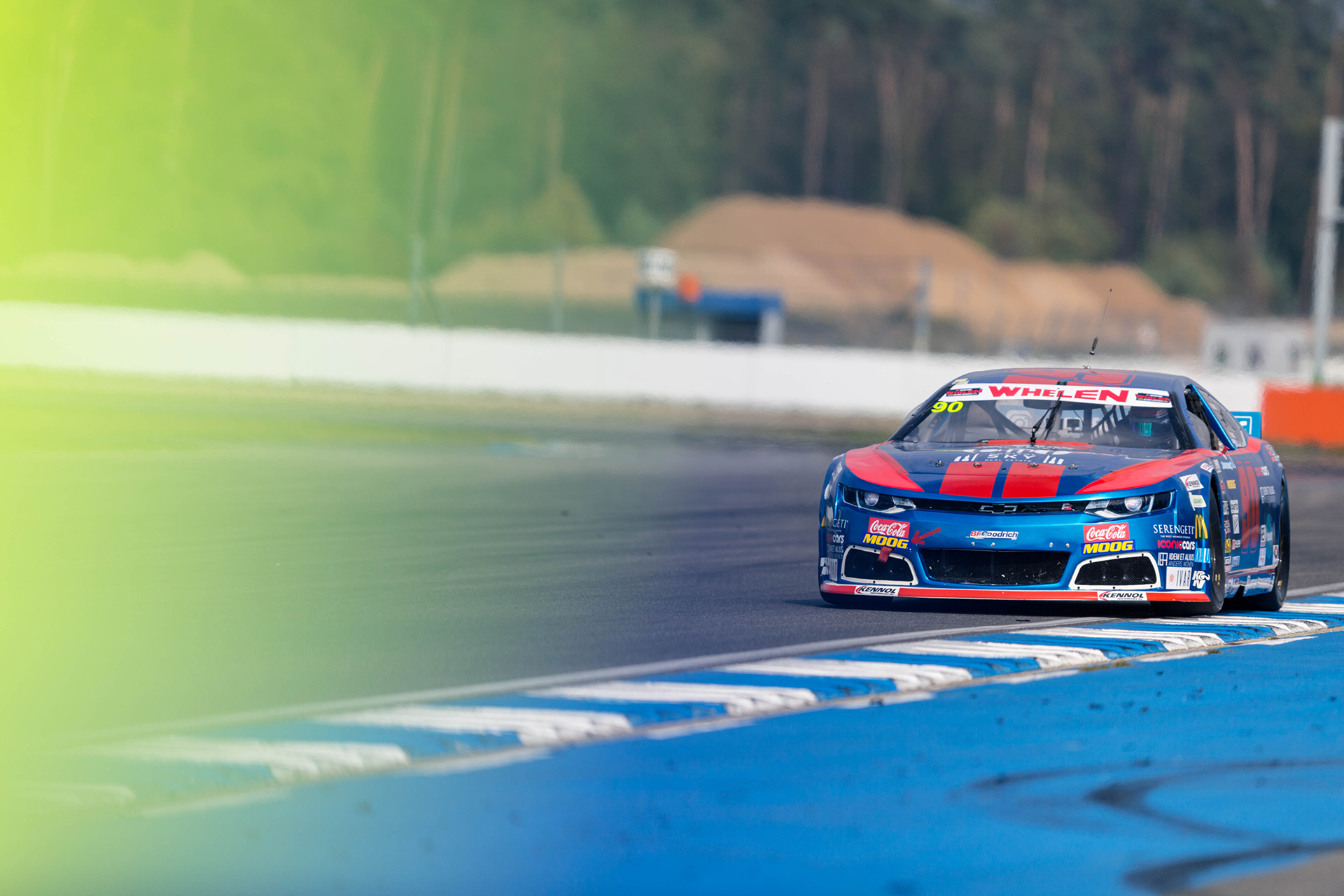 Alex's first season in the NASCAR Whelen Euro Series sees him finish 12th overall out of the 42 Elite 1 drivers, but this is not the full story.

At just 19 years of age, Alex was the youngest driver to line up in Elite 1 at the start of the season in Valencia, Spain, 1,246 miles from his home in Southam. Having never raced a NASCAR stock car before he would join very experienced grid of drivers, racing one of the most specialist cars in Europe.

2 practice sessions to get used to the car, and then Alex lined up with the other 30 drivers for the first time, starting in 19th position, but 5th placed junior driver. 16 laps later and he crossed the line in 15th place and as the 4th place Junior driver.

Race 2 in Valencia saw Alex begin in 17th place. With one race under his belt and 40 miles driven on the Ricardo Tormo circuit, he approached the second race with one aim - to improve his finishing position. Unfortunately a promising start, which saw Alex move up the field into 8th place, was cut short when a gear selection issue developed on his MRT NASCAR. Unable to select all the gears, Alex slipped back and finished his second race in 15th place, matching his race one result. A great finish for somebody who had never raced a NASCAR before or seen the Valencia circuit; not to mention who had met his team for the first time a day before the race weekend.

"I was properly thrown in at the deep end in Valencia, with no experience of the car, track, series or team and, one of the most talented fields of drivers in any series currently racing. I learned a lot and couldn't wait to get to Italy for the next round.”

A short break then Alex headed the 877 miles from his home in Southam in May to the Italian circuit of Franciacorta for rounds 3 and 4 of the series. As the home round for his Italian MRT team, it was decided Alex would not race in the Elite 1 category but rather race in Elite 2. A difficult decision for Alex, but as it was an important race for the team, he lined up on the grid in 14th place.

Unfortunately, Italy turned out to be nightmare! Between car troubles and non-finishes, we knew something had to change for Brands Hatch. It was a blessing in disguise however, as it led us into our current situation, and the move to Braxx.”

The disappointment of rounds 3 and 4, and issues within the MRT team resulted in Alex heading for his most important race weekend, and only one in the UK, again to meet another new race team. In the off period before the UK round at Brands Hatch Alex signed a deal to contest the rest of the season back in Elite 1 with the Belgian Braxx Racing team.

Now as he headed south from his home in Southam down the local motorways, he had 118 miles to get ready for a new team, new car and his home round. With thousands of UK motorsport fans attending the annual American Speedfest, Alex wanted to put on a good show and give them all something to cheer.

The normal 2 practice sessions saw Alex set times which put him in the top ten and then he used all his previous circuit knowledge to set the fastest time of the 29 drivers and head the timesheet as the drivers lined up for Superpole.

His 1st Superpole, and what would be the first of many more, saw Alex qualify in 9th place overall, not a bad result for the 1st drive for his new team, and the highest placed driver of the team’s three drivers. With 30 laps ahead of him, Race 1 was full of expectations and Alex did not disappoint. A strong start saw Alex move through the pack and finally cross the line in 7th place, after being shuffled back from 4th in the late stages. He was however the 2nd placed Junior driver, resulting in his first visit to the podium.

With a strong result in the 1st race, in Race 2 the aim was to give the 40,000 fans in attendance a British driver to cheer on to the podium. Alex finished race 2 in 6th place and again, as the 2nd Junior to achieve his second podium finish of the season.

So how do you better than Brands Hatch was the question posed as Alex headed the 531 miles into France for the final round before the Summer Break, the 2018 Oval World Challenge on the 0.3 mile oval track in Tours.

Tours would be another new challenge for Alex as it marked the 1st time he would race on an oval circuit. The race format would also be different with 2 semi-finals from which the top 10 would qualify for the finals.

Securing a 9th place grid position put Alex in a good place for the first Semi Final. 35 laps saw Alex cross the line in 4th place and the 1st Junior driver. With the Semi-Final determining the starting position in the 1st Final, Alex started fourth in the inside lane. 43 laps later and the flag fell with Alex sitting in 5th place, again, as the 2nd Junior driver, and what would be his 1st visit to the podium of the weekend.

Visit number 2 to the podium was a great way to close Alex’s first half of the 2018 NASCAR Whelen Euro Series.

After a long 2 month break, which included a test with Braxx Racing at Hockenheim, Alex headed back to the circuit for the first of the double points playoff race weekends. 608 miles away from his home, Hockenheim was a key round for Alex as he aimed for a top 10 position in the series and, to retain his 100% podium record in a Braxx car.

Another strong qualifying performance saw Alex again join the top drivers in the Superpole shootout to confirm his starting position, and maintain his 100% Superpole record, since joining the Braxx Racing team.

At the end of the Superpole shootout,Alex secured a strong 6th place start, as the top placed Braxx driver, just over 0.35 seconds ahead of his teammate, Marc Goossens.

Alex lined up on the grid for the 1st Elite 1 Race surrounded by all the series lead drivers and in a strong position to maximise his points score with a clear target, the podium.

A strong start saw Alex race off with the lead cars, but as he battled for position, a bolt in the front suspension broke causing Alex to retire his car back to the pits. Back in the pits, the team did their best to replace the failed component, but by the time the car was repaired Alex was 12 laps behind the leaders.

Never one to give up, Alex used the remaining laps to push as hard as he could to record a good lap time to secure his starting position in the 2nd Race. 24th place was not the result Alex had hoped for, all due to the failure of a single bolt in the front suspension!

“Having my first mechanical failure at such an important race was difficult, however that's the tough part of racing sometimes!”

Putting his 24th place finish behind him, Alex lined up for the 2nd Race in 12th position and focused on moving forward as far as he could. A solid drive saw Alex cross the finishing line after 17 hard fought laps in 9th place and the 5th placed Junior driver. Great recovery from losing points in the 1st race saw Alex leave Hockenheim in 11th place overall in the standings.

10 Races completed, and now everything rested on the results in the final round at the legendary Zolder circuit, the home track for Alex’s Braxx Racing team, and the final 375 mile trip into Europe.

Keen to end his 1st year in Euro NASCAR on a high Alex, who had never seen, never mind

driven on the Zolder circuit, indicated his intentions by yet again reaching the Superpole shootout to decide the 1st Race starting positions. 100% Superpole record in his first season with Braxx is an amazing achievement when it is noted that of the 4 circuits raced on only one of these had Alex actually raced on before.

With a Superpole position confirmed Alex had 2 laps to claim his starting position and once again he rose to the challenge and claimed 9th place as the top Braxx driver, out-qualifying both his more experienced local team mates.

Race 1 turned out to be a tale of two halves with Alex having a strong drive and improving on his starting position. However, as the 29 cars started their final lap, he held a strong 8th place. A great overtake of the car in front just before the penultimate corner on the last lap moved Alex into 7th place overall and what looked like a strong finish. Then everything changed when the passed car drove Alex off the track with a reckless last corner move forcing him into the gravel trap, which he drove out of, only to drop him down to 12th place overall and 5th placed Junior as he crossed the finishing line.

The final race of the 2018 season would decide where Alex would sign off his 1st season in Euro NASCAR, with double points on offer a strong finish could see Alex finish in the top 10 in his first season.

With everything to play for Alex started the 2nd Race with one objective, score as many points as possible and get back on to the podium! Lining up for the last time in 2018, Alex was in a confident mood, and a solid start positioned him strongly as the cars neared the end of the 1st lap. As the cars raced up to the tight right-hand corner before the dash down the straight to complete the first lap, Alex braked as normal. However, as he braked, the rear suspension link on his car sheared and he had to take to the outfield and retire his car with less than a lap completed.

So, Alex ended his first Euro NASCAR season at the side of the track watching the other Elite 1 drivers battle for the final positions in the race and championship.

"It has been an unreal year, to race in NASCAR has been a dream come true and, despite not always having luck on our side with a very up and down season, I can't wait to be back next year and go for it!"

Now, the work starts to get back on the grid in 2019. With a year of experience, Alex will be going back with one objective, which is to win the 2019 title.

In less than a year, Alex has created a unique awareness within the series, which has resulted in a high level of media coverage across both Europe and the USA. He has become a great ambassador for his team, partners, and NASCAR, established himself as one of the fans’ favourite drivers and, is still only nineteen years old.

SHUT DOWN BUT STILL RACING